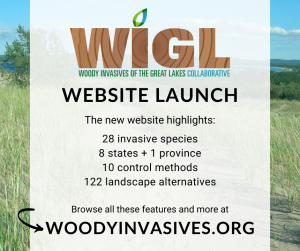 Green is not always as good as it first appears. Walking you land, you may think of a lush tangle of shrubs and vines as a sign of good health. It does not take long to discover that a green wall does not produce a healthy woodland. Soon enough tackling woody species on your property moves to the top of your todo list.

Clair Ryan is the Coordinator of the Midwest Invasive Plant Network and the new Woody Invasives of the Great Lakes (WIGL) Collaborative. According to Ryan, “Often, especially near urban and developed areas, forests and other natural areas are clogged with invasive woody species that damage wildlife habitat, block trail access, and harbor larger populations of ticks that spread disease to humans,”

The WIGL Collaborative developed a website to help landowners and others learn to identify the woody invasive plants around them and start controlling them on their properties. Their website, woodyinvasives.org, contains a wealth of information about how to identify woody invasive species and tell them apart from similar beneficial plants. The site contains an interactive map showing how Great Lakes governments regulate these species. In addition, it has detailed management approaches, and non-invasive alternatives.

Besides the website, WIGL is also sponsoring a free two-day Woody Invasives of the Great Lakes Collaborative Summit on November 5-6, 2020.

WIGL was formed because invasive trees, shrubs, and woody vines pose a serious threat to natural areas in the Great Lakes region. They out-competing native plants and damaging wildlife habitat. Forests are a primary water source to the Great Lakes. If the forests aren’t healthy, it will be very difficult for the lakes to be healthy.

The current problem has actually been a long time in the making. Most of the region’s most common invasive woodies came to North America more than one hundred years ago. Among these early arrivals are buckthorn, autumn olive, and bush honeysuckle. Growers sold them either as ornamental garden plants or for erosion control. We recognized the problems posed by wood invasive species only after our woodlands became choked and almost unusable.

Birds eat the fruit of these invasive woody plants and spread their seeds. Over generations, seeds can reach even relatively pristine natural habitats. Growers sold them because of their toughness and adaptability to less-than-ideal conditions. However, this a resilience lets invasive plants out-compete native species that would grow in similar habitats.

Most of the woody invasive species listed by the WIGL collaborative are no longer sold in nurseries and garden centers. However, some invasive species like Callery pear, Japanese barberry and winged burning bush are all still available. As a result, your can find them in just about every big box store.
The WIGL Collaborative joins several other regional invasive species collaboratives funded through the Great Lakes Restoration Initiative (GLRI). The federal government funds the GLRI with broad bi-partisan support.

As private landowners, timber stand and wildlife habitat improvement are important to our stewardship ethic. Protecting the natural heritage or our property often begins with managing those invasive woody species. Tackling woody species takes good advice; GLRI has what it takes.