Preliminary results are available from the Wisconsin Department of Natural Resources the Southwest Wisconsin CWD, Deer and Predator Study (SW CWD Study). This was a three year study where more than a thousand white tail deer were collared, then necropsied when they died. The study also assessed the first year fawn mortality in the same region. 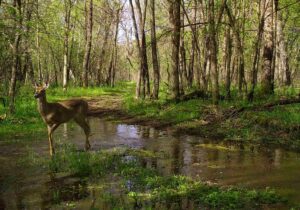 In total, staff evaluated 433 deer mortalities. Most deaths associated with chronic wasting disease (CWD) resulted from starvation. They also found evidence of a relationship between CWD and ectoparasites like lice and ticks. Particularly surprising was a connection between CWD and pneumonia. Researchers found evidence that a subtype of pneumonia called bronchopneumonia which often develops when either bacteria or particles in the air settle in the front and lower area of a deer’s lungs. 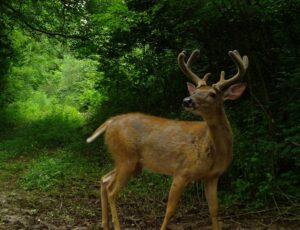 Another intriguing finding was larger role does could play in CWD transmission than previously thought. Does have a lower rate of infection than bucks, but they live longer and are much more likely to reach the end stage of CWD before dying. The long lives of does may compensate for their lower infection rate, increasing the chance of direct transmission between does (before death) and deposition of CWD onto the landscape (after death).

If the lower infection rate of does is compensated, then we need to rethink the role of does in CWD transmission. According to lead researcher, Dr. Marie Gilbertson, is definitely worth looking into more. 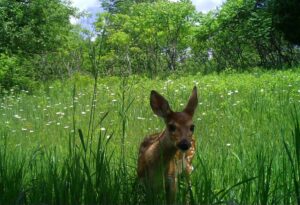 What About Fawn Survival?

During the first three years of the study, researchers collared 323 fawns. First year mortality rates ranged between 43% and 51%. The primary cause of death was predation and the most lethal predator for fawns was the coyote, though bobcat did have some impact, as well. According to the survival curves, the highest expected rate of mortality occurs right after birth, which is the sharp drop in the curve during the first month or two.

CWD was not a factor in fawn mortality as it takes more than a year for the disease to develop and cause death. Fawn starvation in southwestern Wisconsin was pretty rare, rarer than when we studied fawn survival in the Wisconsin northern forests and eastern farmlands The likely reason being the abundance of grasslands in the southwest region, which provides a more nutritious diet.

Overall, the results of the fawn survival analysis were unsurprising and within expectations. These survival rates do not pose a problem to the population of the herd.