The Vanguard of Spring 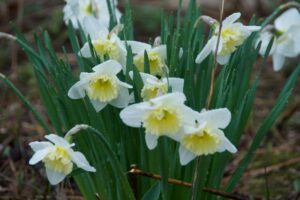 The morning was spent watching the woods from inside. The moderate rain blowing in from the north at 40 degrees was not calling to me — at least not in any way that would have welcomed me into its embrace. This has been a spring more “normal”

But there are the daffodils. They were here when we arrived three years ago and my wife has split and transplanted them until they ring more than half the yard. This has been an amazing year for the intrepid harbingers of spring. In previous years, they popped up much earlier. Unlike those warmer and more tempestuous spring seasons, the unrelenting cool temperatures and ample rain are just fine as far as the daffodils are concerned.

In full bloom for a week now, they show no sign of fading. Quite the contrary — like their cousins plucked, bundled, wrapped and placed in refrigerators for sale halfway around the world, our daffies look picture perfect. Heck, not only are they staying cool and well watered, the continued connection with their roots seem to endow them with perceived super powers. Fearless and unbowed, they preside as masters of all they survey. And why not, aren’t their leaves ten times the size of those supposed domineering black cherry trees, several hundred times their size? The boxelder too looks weak and pathetic next to those proud daffodils.

In the weeks to come the daffodils will eventually fade. They will be replaced in our consciousness by mayapples, bloodroot and most certainly morel mushrooms. As the rain retreats somewhat allowing warming air an soil temperatures to release this year’s cycle of life, the squirrel farm will send forth waves of grasses, sedges and wildflowers to dazzle and amaze. 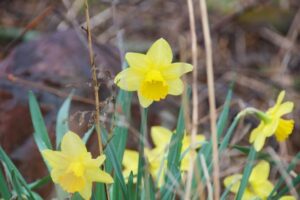 Through much of that time, the daffodils will quietly manufacture food and store it away so that they can once again herald the reawakening of life in Wisconsin.

[Editors note: this post was written last week. Wisconsinites will note the weather has brightened in the ensuing days and the daffodils are now being joined by a phalanx of woodland wildflowers.]