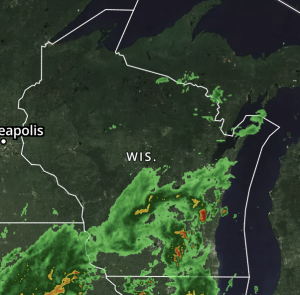 Radar stands for “radio detection and ranging.” It works by emitting a pulse from a transmitter that bounces off of a target, and bounces back. You are familiar with weather radar maps, but precipitation isn’t the only thing that radar finds. Detectable targets include everything from aircraft to smoke particles to – yes – migrating animals! Advancements in radar equipment make it easier to distinguish birds from other targets. It can quickly process that information to predict migratory activity. Radar is just the tool if you want to know when to check out your favorite migratory hotspots.

But birds aren’t the only animals to be detected this way. As monarchs are migrating south, they have also been spotted on radar! 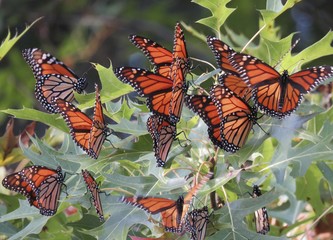 Each fall, as temperatures drop in the United States and Canada, monarch butterflies complete a migration south to the mountains of Mexico. Some individuals traveling up to 3,000 miles. The butterflies travel by daylight and roost in large congregations at night. Incredibly, the monarchs making this journey have never been to Mexico before. It takes multiple generations to make the journey north each spring. Once on their summer feeding grounds, monarchs hatch several generations of young. it is the final hatch, which occurs in late July and August,  that migrates south. Researchers have found that the insects use a combination of cues including the earth’s magnetic field and the position of the sun to aid in navigation.

Unfortunately, monarch populations have been in steep decline in recent years due to loss of habitat and the use of herbicides that kill milkweed, the plant on which these butterflies lay their eggs. The good news? You can help monarchs when they return in spring simply by adding beautiful flowers to your garden. Of the 21 native milkweed species, there are several that grow well in yards and containers. Be sure to source your milkweed from retailers, such as native plant nurseries, to ensure there are no insecticides that could harm monarch caterpillars. With your help, we can make strides to protect these beautiful butterflies.

[This post is adapted from an article “Monarchs on the Move” that appeared in the September 2021 Florida Fish and Wildlife Conservation Commission Kite Tales newsletter.]