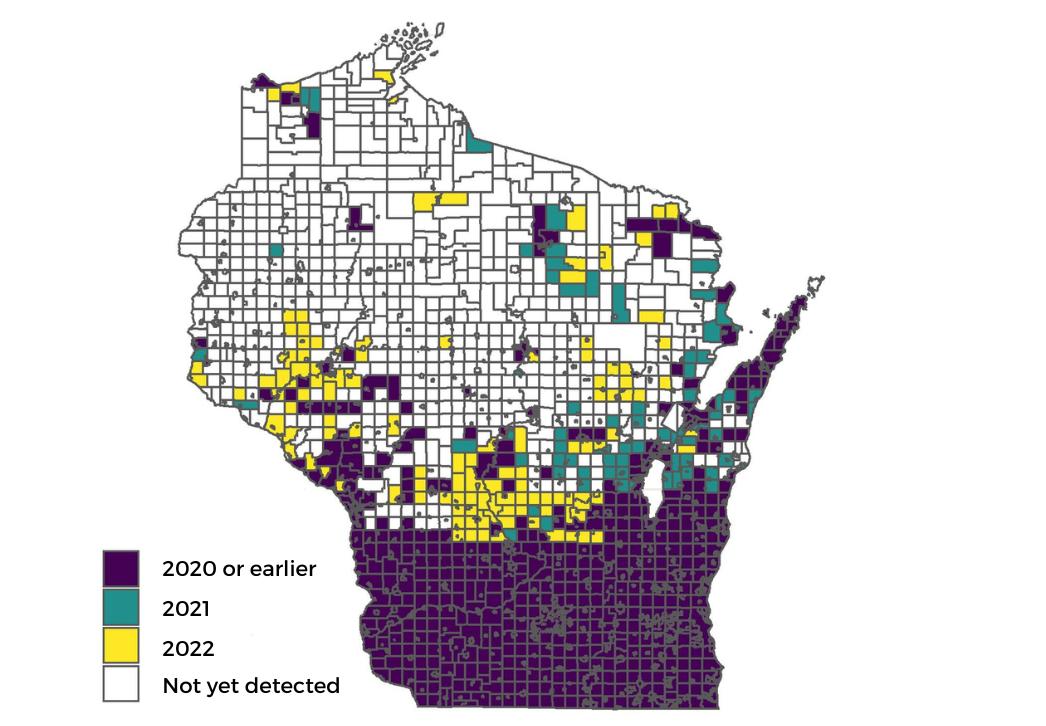 [Reprinted from the Wisconsin DATCP webpage]

Emerald Ash Borer (EAB) is an invasive beetle introduced from Asia, first detect Wisconsin in 2008. It now exists in 58 of Wisconsin’s 72 counties. Currently, the most severe EAB damage is concentrated in the southern half of the state. Large areas currently report no EAB; only about a third of the state’s municipalities confirm EAB infestations. In these areas, it may not be present yet, or it may be present in such low numbers that damage is not yet apparent.

EAB attacks all species of ash trees, except mountain ash, which are not true ash trees.

UW Extension published a useful Homeowner Guide to Emerald Ash Borer Insecticide Treatments. It not only lists the products landowners can use to treat individual trees. Unfortunately, these products are relatively expensive and you must periodically re-treat each tree. The Wisconsin Arborist Association publishes a list of professionals that can treat ash trees. They use products and application methods not readily available to homeowners.

There are currently four biological control agents approved by the USDA. All four are parasitic wasps; one is native to North American, while the other three are introduced. At the time of this posting, none of them are widely available. The USDA deploys the wasps along the leading edge of the EAB infestation, in large ash dominated stands, mostly on public lands. So, if you are a private landowners in an area currently free from EAB, you slow or prevent its spread. Biological controls do not, however, prevent the borers, it merely controls their numbers to reduce the damage they cause.