Yew Killed Our Deer … and Elk 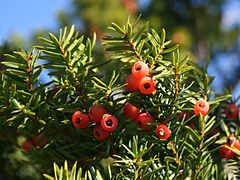 There is a killer shrub lurking in many Wisconsin yards. Japanese yew are, according to the Idaho Statesman, killing mule deer, elk and pronghorn sheep in large numbers. Heavy snow makes it difficult for deer and elk to find food. They become desperate and venture into people’s yards. The popular landscape shrub resembles native yew species, but contains a toxin called taxine B that causes cardiac arrest.

Matt Miller Cool Green Science blogger for the Nature Conservancy recommends, “If you live in deer or elk range, please don’t plant this shrub. Large mammals have a difficult enough time in the winter without this added threat.”

Many rural western landowners are removing the shrubs to prevent accidental poisonings. Others who are concerned about deer and elk but also love their Japanese yew bushes are wrapping them in burlap for the winter. Not only does it protect browsing wildlife but it also reduces water loss from the bushes. This prevents winter kill; a browning of branches that occurs when they dry out in winter wind.