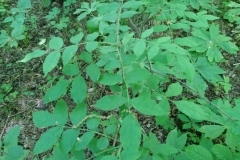 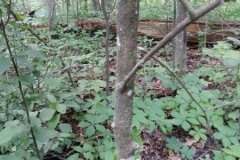 Prickly ash is native to southern Wisconsin and easily becomes invasive on sunny sites or those with light shade. This fast growing understory trees forms dense clones which prompt many landowners to actively reduce its presence. Thorns along its stems are a hazard making prickly ash even less desirable. The tree is, however, beneficial as it is a host for the larvae of butterflies that include the Thoas swallowtail (Papilio thoas), giant swallowtail (P. cresphontes), and spicebush swallowtail (P. troilus).

Zanthoxylum from xanthos for “yellow” and xylon for “wood”. This is one of the best ways to tell prickly ash from black locust or similar woodland invaders.

Plants have either male of female flowers to prevent self-fertilization. Flowers appear in 2″-12″ umbellate clusters which means they spread out like an umbrella. Pedals are green to yellow in color with 4–5 petals.

Creates dense thickets where nothing can grow beneath it. Thorns cause injury and damage tires.

Simply cutting or pulling prickly ash is NOT RECOMMENDED. Because prickly ash forms dense clones that store nutrients in fleshy shared roots, called rhizomes, merely cutting off stems will not kill the plant. New sprouts quickly emerge from nodes on those rhizomes. Likewise, attempts to dig up prickly ash will prove fruitless. Any small piece of prickly ash root remaining in the soil is likely to sprout a new stem. Frequently, more stems emerge following mechanical treatment than were present beforehand.

Cut each stem very close to the ground and treat the stump with an herbicide containing Triclopyr sold under various trade named including Garlon 4 and Garlon 3A. Garlon 4 is an ester (oil soluble) formulation that is absorbed through the cut stump and translocated quickly transported to the roots. Because it is mixed with bark oil, Garlon 4 can be used throughout the winter because it will not freeze. This product should not be used, however, when the temperature exceeds 75º F as it evaporates from the stump before the chemical can be carried to the roots. Garlon 3A is an amine (water soluble) formulation, which makes it the right product for use during the summer.

Mix triclopyr according to label direction for cut stump treatment. Use a hand sprayer to set to solid stream and apply enough chemical to wet the entire sapwood ring on the tree. For small saplings, a couple of drops will be sufficient to coat the entire surface of the cut stump. Adding a colored die makes it easier to see where the chemical was applied.

This method involves spraying the base of each prickly ash tree or sapling completely around the trunk to a height of 12″-15″. Using a backpack sprayer makes the process go relatively fast is much easier on your back. Mix tryclopyr according to label directions for basal bark treatment. While the chemical is more dilute than cut stump mix, you will use significantly more chemical because the area treated is greater. Basal bark treatment has the added advantage that you can leave stems standing. The plant will die and rot causing the trunks to fall over within a year or two. Basal bark treatment is more expensive but much faster than cut stump.

Gather cut materials, stack and burn them. This is particularly important if managing prickly ash in late summer or fall when berries are present on the branches. Be careful to either completely burn brush piles to kill all seeds or remove seed heads, bag them and place in a landfill to prevent them from germinating.

This is the preferred treatment for young prickly ash shoots which are highly susceptible to fire. It will likely take several burn cycles to substantially reduce prickly ash clones. However, because prescribed fire can be applied quickly over many acres, it is by far the most economical management method.

The most effective strategy for longterm control of prickly ash combines initial basal bark or cut stump treatment with spring prescribed burns every 2-3 years. This approach has the added benefit that it can be combined with brush management practices for additional invasive species like buckthorn, multiflora rose and honesuckle.

Height at Base Age (Max):

Description: Propagation by seed is possible. Seed Collection: Capsules may be hand-picked from the shrub. The capsules open, discharging the seed after drying. Seed Treatment: Seed exhibits a strong dormancy that can be broken with a two-hour H2SO4soak followed by cold-moist stratification for 120 days at 41 degrees.