What would you say if somebody told you that a weed could crack the asphalt in you driveway, force its way through the foundation of you house and prevent maple regeneration in your woodland? The weed is called Japanese knotweed and it is here in Wisconsin.

Researchers in Pennsylvania found that the invasive plant, Japanese knotweed (Fallopia japonica), can grow so thick in river floodplains that it can prevent silver maple seeds from taking root and regenerating the forest canopy. 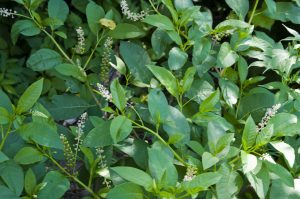 Japanese knotweed is a serious threat in wet soils, especially in lowlands and along riverbanks. Knotweed is also found along bike paths in Madison and roadways in Iowa County.

Getting rid of Japanese knotweed is very tough. It grows up six to ten feet tall on hollow stalks that die back in the winter. Knotweed produces a large amount of seed that sprouts really well. High water and even mower decks can easily spread seed or small pieces of cut stalks; both of which can start an whole new infestation. Knotweed also spreads through underground roots called rhizomes that can grow up to fifteen feet deep and twenty feet horizontally in a single year.

Kill very small patches by covering with black tarps that must be held down in place and cover an area fifteen feet wider than the patch itself to keep the roots from creeping out around the edge. The tarps must be left in place continuously for at least three years. This approach does not work for most situations.

Use a combined approach to attacking your Japanese knotweed problem. Cut down in June when the plants are around knee high. This removes stored nutrients from the roots and weakens the plant. Carefully bag and remove EVERYTHING and burn it completely or take it to a commercial landfill. Every small piece of stem that contains a node (where the leaf and stem meet) can form a completely new plant. NEVER take cuttings to a compost facility or place them on a home compost pile.

Repeat the process of cutting, bagging and removing all stems, leaves, flowers and seeds in late August or the first week of September. Again, burn the cuttings completely or taken them to a commercial landfill.

Three weeks later, spray the plants that have re-sprouted with Glyphosate (commercial products include Roundup) according to the label directions.

For more information about managing Japanese knotweed, check out the Wisconsin DNR Invasive Species factsheet or the UW Extension bulletin.