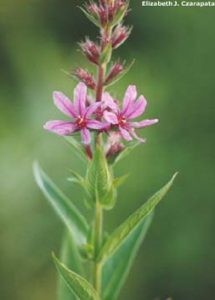 Yes, the invasive perennial purple loosestrife (Lythrum salicaria) was the scourge of midwestern wetlands for twenty years. Marshlands turned a pinkish purple every summer and fall because virtually all competition was eliminated.

Researchers chose Galerucella beetles because they knew Galerucella feed on loosestrife in Asian and Europe where it grows naturally. Local school children and non-profit organizations set up beetle rearing projects; releasing the natural loosestrife predator to feed and lay eggs on the exotic invader.

Note that biological control is not eradication. Wetlands rebounded because the number of beetles rise and fall with those of the loosestrife. Because of the Galerucella beetle, purple loosestrife is now just another member of the wetland community and no longer the big bad bully pushing everything else out of its way.

The reason why the Galerucella beetle is a rare success story is that biological controls must be thoroughly vetted prior to introduction. Scientists must ensure that the beetles are effective, but even more critical, that they do not cause other unintended consequences. Researchers exposed Galerucella beetles to pretty much every native plant they were likely to encounter in the their new home, but safely in isolated greenhouses. Researchers made sure the beetles would not harm native plants.